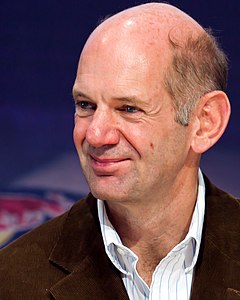 Who is Adrian Newey?

Adrian Newey OBE is a British Formula One engineer. He is currently the chief technical officer of the Red Bull Racing Formula One team.

Newey has worked in both Formula One and IndyCar racing as a race engineer, aerodynamicist, designer and technical director and enjoyed success in both categories. Considered one of the best engineers in Formula One, Newey's designs have won numerous titles and over 80 Grands Prix. With ten Constructors' Championships he has won more than any other designer and is the only designer to have won constructor's titles with three different Formula One teams. After designing championship-winning Formula One cars for Williams F1 and McLaren, Newey moved to Red Bull Racing in 2006, his cars winning the Formula One drivers' and constructors' championships consecutively from 2010 to 2013. Newey designs also won the 1985 and 1986 CART titles.

Discuss this Adrian Newey biography with the community: