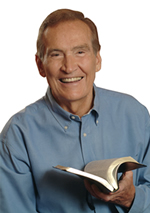 Who was Adrian Rogers?

Adrian Pierce Rogers served three terms as president of the Southern Baptist Convention. He was also a Southern Baptist pastor whose church services aired on television, and a conservative author.

Rogers was born in West Palm Beach, Florida. He was called to the Christian ministry at the age of nineteen. He graduated from Stetson University in DeLand, Florida, and New Orleans Baptist Theological Seminary. Rogers was ordained by Northwood Baptist Church in West Palm Beach. His first job as a senior pastor was at Fellsmere Baptist Church, a small congregation in Fellsmere, Florida. He performed his first baptism in the C-54 Canal near Fellsmere. In 1972, he became the senior pastor of Bellevue Baptist Church in Memphis, Tennessee, where he remained until March 2005. During this period, the church's membership grew from 9,000 to 29,000, and the church moved into a new, megachurch facility. Rogers was named pastor emeritus after his retirement in March 2005.

Discuss this Adrian Rogers biography with the community: