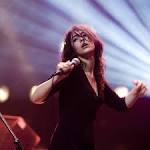 Who is Adrienne Pauly?

Adrienne Pauly is a French actress and pop-rock singer, born in Clamart, France.

She joined the Conservatoire National Superieur d'Art Dramatique in 1996, where she studied drama, and acted in films until 2002, when she discovered the piano through Camille Bazbaz. After, she recorded a demo and, in 2004, made his first concert at the House of Live in Paris, and then to Dejazey in Rennes and thereafter at the Lavoir Moderne and at the Olympic Café. She released her first album on 16 October 2006.

Discuss this Adrienne Pauly biography with the community: