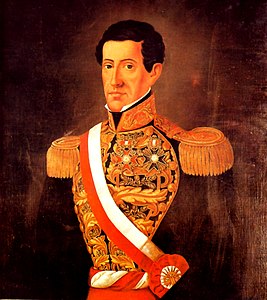 Who was Agustín Gamarra?

Agustín Gamarra Messia was a Peruvian soldier and politician, becoming twice President of Peru from 1829 to 1833 and from 1838 to 1841.

Gamarra was a Mestizo, being of mixed Spanish and Quechua descent. He had a military life since childhood, battling against the royalist forces. He then joined the cause of Independence as second in command after Andrés de Santa Cruz. He also participated in the Battle of Ayacucho, and was later named Chief of State. After the invasion of Bolivia in 1828, he was named a mariscal, a highly-esteemed military officer.

After the defeat of José de la Mar in Gran Colombia, Gamarra urged his overthrow and assumed the presidency for a brief period after Antonio Gutiérrez de la Fuente. The peace treaty with Gran Colombia was also signed during Gamarra's government.

Discuss this Agustín Gamarra biography with the community: