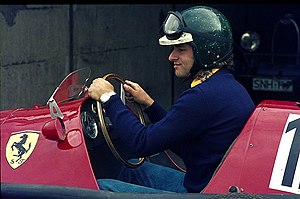 Who is Alain de Cadenet?

Alain de Cadenet is a television presenter for the Speed Channel and ESPN. He has hosted numerous shows on Speed, including Legends of Motorsport, as well as the network's coverage of the Goodwood Festival of Speed. He also hosted Victory By Design, in which he drove vintage racing cars and talked about their history. Currently, de Cadenet hosts the Velocity Channel show Renaissance Man, a history programme whose coverage includes cars, motorcycles, the Rolls-Royce Merlin engine and racing at Monaco.

De Cadenet is the son of Maxime de Cadenet, a lieutenant in the French Air Force, and his wife Valerie. He made his reputation building and driving his own sports prototypes, taking on works teams and occasionally beating them. In 1976 he finished 3rd overall at the Le Mans. In 1980, with co-driver Desiré Wilson, he won two rounds of the World Sportscar Championship —the Monza 1000 kilometers and Silverstone 6 hour events. This was a major achievement in an era of increasing professionalism, when it was very difficult for privateers to defeat larger, better-funded teams that had factory support.

De Cadenet also races classic and vintage cars, having owned and raced numerous examples, particularly Alfa Romeos. In addition to cars, he also collects motorcycles and aircraft, and owns a Supermarine Spitfire. A video on the Internet shows a clip from a documentary in which a Spitfire flies extremely low over his head. He was also a collector and authority on George V stamps, and advised the Royal Mail on their collection.

Discuss this Alain de Cadenet biography with the community: