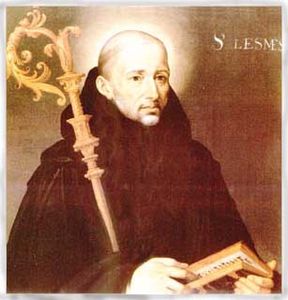 Who was Adelelmus of Burgos?

Saint Adelelmus, O.S.B., also known as Aleaunie and Lesmes, was a French-born Benedictine monk venerated as a saint in the Roman Catholic Church. Born in Laudun, Poitou, he joined the military at a young age; he went on duty before making a pilgrimage to Rome. During his pilgimage he met Saint Robert of Molesme and left the military life for the Benedictine order.

Queen Constance of Burgundy of Castile was impressed with the reports of Adelelmus' holiness, and invited him to live in Burgos, Spain. She and King Alfonso VI founded a monastery in the city in 1079 on the condition he would be its abbot. He added a hospital and a church to the building soon after. He later used his military training to help Alfonso against the Moors.

After death, Adelelmus became the patron saint of the city of Burgos in Spain. No longer observed in the General Roman Calendar, Adelelmus' feast day is kept on January 30.

Discuss this Adelelmus of Burgos biography with the community: