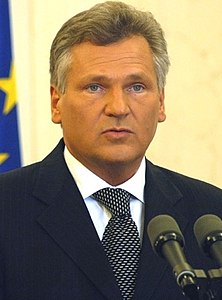 Who is Aleksander Kwaśniewski?

Aleksander Kwaśniewski is a Polish politician and journalist. He served as the President of Poland from 1995 to 2005. He was born in Białogard, and during communist rule he was active in the Socialist Union of Polish Students and was the Minister for Sport in the communist government in the 1980s. After the fall of communism he became a leader of the left-wing Social Democracy of the Republic of Poland, successor to the former ruling Polish United Workers' Party, and a co-founder of the Democratic Left Alliance.

Kwaśniewski was democratically elected president in 1995, defeating the incumbent, Lech Wałęsa. He was re-elected to a second and final term as president in 2000 in a decisive first-round victory. His term ended on 23 December 2005, when he handed over power to his elected successor, conservative Lech Kaczyński.

Discuss this Aleksander Kwaśniewski biography with the community: