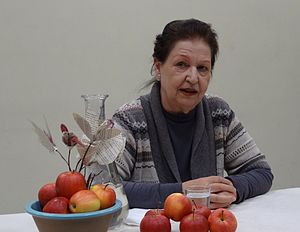 Alenka Puhar is a Slovenian journalist, author, translator, and historian. She is most notable for her 1982 groundbreaking psychohistory-inspired book "The Primal Text of Life" about 19th century social history of early childhood in Slovene Lands, then part of Austro-Hungarian Empire. The book was in 2010 the subject of a television documentary that was in 2010 televised on the national RTV Slovenija. Her grandfather was the photographer and inventor Janez Puhar, who invented a process for photography on glass.

Discuss this Alenka Puhar biography with the community: