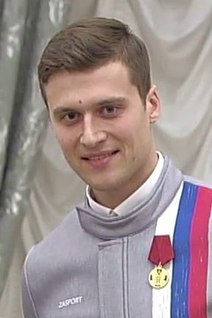 Who is Alexander Enbert?

Alexander Yuryevich Enbert is a Russian pair skater. From 2010 to 2014, he competed with Katarina Gerboldt. The pair appeared at one ISU Championship, the 2011 European Championships where they placed fourth. In April 2014, he teamed up with Vasilisa Davankova.

Discuss this Alexander Enbert biography with the community: