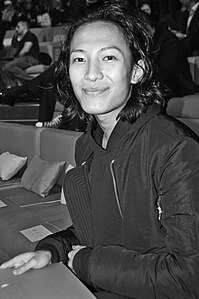 Who is Alexander Wang?

Alexander Wang is an American fashion designer and Creative Director of Balenciaga.

At age 19, he moved to New York City to attend Parsons. In 2005, after two years at Parsons, he decided to pursue the launch of his own label, which predominantly began with a knitwear collection. In Fall 2007, Wang presented a complete women’s ready-to-wear collection on the New York catwalk for the first time, to critical acclaim. He won the CFDA/Vogue Fashion Fund in 2008, an honor accompanied by a $20,000 award to expand one's business. That same year, he launched his first handbag collection. In 2009, women’s T by Alexander Wang was launched, followed by Men’s T by Alexander Wang a year later. In 2009 he was recognized by his peers when he was announced as the winner of the CFDA’s Swarovski Womenswear Designer of the Year Award. Also in 2009, Wang was the recipient of the Swiss Textiles Award. [3] His lines are now stocked globally in more than 700 doors including luxury department stores such as Barneys New York, Neiman Marcus, Bergdorf Goodman, Dover Street Market, Browns, and Net-A-Porter.

Wang is known for his urban designs.

Discuss this Alexander Wang biography with the community: