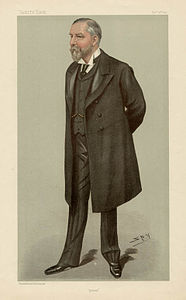 Who was Alfred Cooper?

Sir Alfred Cooper was a fashionable English surgeon and clubman of the late 19th century whose clients included Edward, Prince of Wales. He was born in Bracondale, Norfolk, England, the son of William Cooper, barrister, and his wife Anna, née Marsh. He was educated at Merchant Taylors' School.

His speciality in venereal disease gave him an unusual access to and perspective on late Victorian aristocratic morality. He was devoted to his wife Lady Agnes Duff, the youngest daughter of James Duff, 5th Earl Fife by his wife, Lady Agnes Hay, daughter of William Hay, 18th Earl of Erroll and granddaughter of King William IV by his mistress, the actress Mrs. Dorothy Jordan. They had four children together, the youngest being Duff Cooper, the prominent British statesman of the 1930s and 1940s. Knighted in 1902 for his services to medicine, Cooper died in Menton, France, 1908.

Sir Alfred's descendants include the publisher Rupert Hart-Davis; his son, the television presenter Adam Hart-Davis; the writer John Julius Norwich; and the Conservative Prime Minister of the United Kingdom, David Cameron, a great-great-grandson.

Discuss this Alfred Cooper biography with the community: