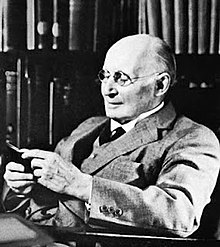 Who was Alfred North Whitehead?

Alfred North Whitehead, OM FRS was an English mathematician and philosopher. He is best known as the defining figure of the philosophical school known as process philosophy, which today has found application to a wide variety of disciplines, including ecology, theology, education, physics, biology, economics, and psychology, among other areas.

In his early career Whitehead wrote primarily on mathematics, logic, and physics. His most notable work in these fields is the three-volume Principia Mathematica, which he co-wrote with former student Bertrand Russell. Principia Mathematica is considered one of the twentieth century's most important works in mathematical logic, and placed 23rd in a list of the top 100 English-language nonfiction books of the twentieth century by Modern Library.

Beginning in the late 1910s and early 1920s, Whitehead gradually turned his attention from mathematics to philosophy of science, and finally to metaphysics. He developed a comprehensive metaphysical system which radically departed from most of western philosophy. Whitehead argued that reality was fundamentally constructed by events rather than substances, and that these events cannot be defined apart from their relations to other events, thus rejecting the theory of independently existing substances. Today Whitehead's philosophical works – particularly Process and Reality – are regarded as the foundational texts of process philosophy.

Discuss this Alfred North Whitehead biography with the community: