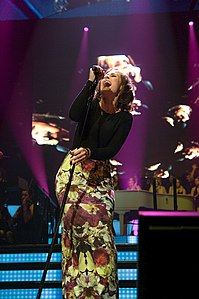 Who is Alison Moyet?

Her UK album sales have reached a certified 2.3 million, with over a million singles sold. All seven of her studio albums and three compilation albums have charted in the Top 30 UK Album Chart, with two of the albums reaching number one. She has also achieved nine Top 30 singles and five Top 10 hits in the UK Singles Chart. Her most recent album the minutes was released in the UK on 6 May 2013. The first single, "When I Was Your Girl", was released on 1 April 2013. A tour of the UK and Ireland to promote the album was announced for October 2013.

Discuss this Alison Moyet biography with the community: