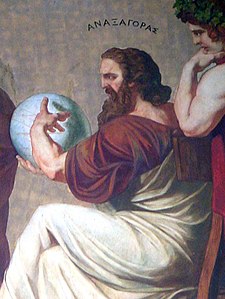 Anaxagoras was a Pre-Socratic Greek philosopher. Born in Clazomenae in Asia Minor, Anaxagoras was the first philosopher to bring philosophy from Ionia to Athens. He attempted to give a scientific account of eclipses, meteors, rainbows, and the sun, which he described as a fiery mass larger than the Peloponnese. According to Diogenes Laertius and Plutarch, he fled to Lampsacus due to a backlash against his pupil Pericles.

Anaxagoras is famous for introducing the cosmological concept of Nous, as an ordering force. He regarded material substance as an infinite multitude of imperishable primary elements, referring all generation and disappearance to mixture and separation, respectively.

Discuss this Anaxagoras biography with the community: