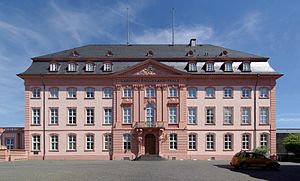 Who was Andreas Joseph Hofmann?

Andreas Joseph Hofmann was a German philosopher and revolutionary active in the Republic of Mainz. As Chairman of the Rhenish-German National Convention, the earliest parliament in Germany based on the principle of popular sovereignty, he proclaimed the first republican state in Germany, the Rhenish-German Free State, on March 18, 1793. A strong supporter of the French Revolution, he argued for an accession of all German territory west of the Rhine to France and served in the administration of the department Mont-Tonnerre under the French Directory and the French Consulate.

Discuss this Andreas Joseph Hofmann biography with the community: