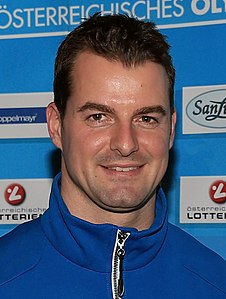 Who is Andreas Linger?

Andreas Linger is an Austrian luger who has competed internationally since 2000. He and his younger brother Wolfgang began luging at a very young age, and did their first doubles run when they were 14. Linger has won three medals at the FIL World Luge Championships with two golds and a bronze. He also earned six medals at the FIL European Luge Championships with a gold, three silvers, and two bronzes. Linger's best overall Luge World Cup men's doubles finish was third twice. He and his brother are two time Olympic champions in the men's doubles event at the 2006 Winter Olympics in Turin, Italy and the 2010 Winter Olympics in Vancouver, Canada. They won in 2006 despite Wolfgang having broken his leg in a luge crash the previous year. In 2010, they successfully defended their gold medal against another team of brothers, Andris and Juris Šics of Latvia.

Discuss this Andreas Linger biography with the community: