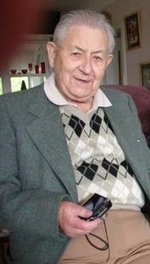 Who was Andrew Donald Booth?

Andrew Donald Booth was a British electrical engineer, physicist and computer scientist who led the early development of the magnetic drum memory for computers and invented Booth's multiplication algorithm.

Booth was raised in Weybridge, Surrey, and educated at the Haberdashers' Aske's Boys' School. In 1937, he won a scholarship to read mathematics at Jesus College, Cambridge. Booth left Cambridge without taking a degree, having become disaffected with pure mathematics as a subject. He chose an external degree from the University of London instead, which he obtained with a first.

From 1943 to 1945, Booth worked as a mathematical physicist in the X-ray team at the British Rubber Producers' Research Association, Welwyn Garden City, Hertfordshire, gaining his PhD in crystallography from Birmingham in 1944. In 1945, he moved to Birkbeck College, University of London, where his work in the crystallography group led him to build some of the first electronic computers in the United Kingdom including the All Purpose Electronic Computer, first installed at the British Rayon Research Association.

Discuss this Andrew Donald Booth biography with the community: