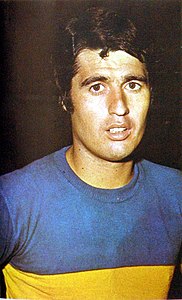 Who is Ángel Clemente Rojas?

Ángel Clemente Rojas, nicknamed Rojitas is a former Argentine footballer who played most of his career for Boca Juniors.

Rojas started his professional career in 1963 with Boca Juniors at the age of 18, he was hit by a major injury early in his career, a collision with an opposition player caused an Anterior cruciate ligament injury in 1963 kept him on the sidelines until August 1964. He returned to help Boca to claim the 1964 league championship. Boca followed it up with another championship in 1965, Rojas made a contribution of 12 goals, the most he ever scored for Boca in a league season.

In 1965 Rojas was selected to play for the Argentina national football team, he scored a goal on his debut against Chile, but only ever played one more game for La Selección.

In 1969 Boca won the Nacional championship and the Copa Argentina, Rojas played a part in both successes. In 1970 they won another Nacional, Rojas' 4th and last league title with the club.

Rojas left Boca Juniors at the end of 1971, having played 224 games and scored 78 goals in all competitions. In his eight years with the club they won four league titles and an Argentine cup.

Discuss this Ángel Clemente Rojas biography with the community: