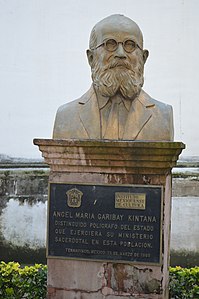 Who was Ángel María Garibay K.?

Fray Ángel María Garibay Kintana was a Mexican Roman Catholic priest, philologist, linguist, historian, and scholar of pre-Columbian Mesoamerican cultures, specifically of the Nahua peoples of the central Mexican highlands. He is particularly noted for his studies and translations of conquest-era primary source documents written in Classical Nahuatl, the lingua franca of Postclassic central Mexico and the then-dominant Aztec empire. Alongside his former student Miguel León-Portilla, Garibay ranks as one of the pre-eminent Mexican authorities on the Nahuatl language and its literary heritage, and as one who has made a significant contribution towards the promotion and preservation of the indigenous cultures and languages of Mexico.

Discuss this Ángel María Garibay K. biography with the community: