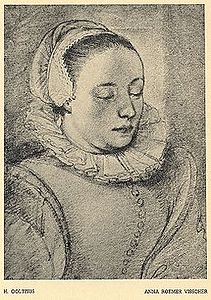 Who was Anna Visscher?

Anna Roemers Visscher was a Dutch artist, poet, and translator.

Anna Roemers Visscher, well known for her literary work, was the eldest daughter of Amsterdam merchant and poet Roemer Visscher and the sister of Maria Tesselschade Visscher. Her family's economic and social status in Amsterdam enabled Visscher to be schooled in languages, calligraphy, embroidery, drawing, painting glass engraving and other arts. Visscher married Dominicus Booth van Wesel in 1624. In 1646, They moved with their two sons Roemer and Johan to Leiden.

Visscher lived during the Renaissance where women poets were often praised for who they were more than for their literary work. She was amongst the group of artists, writers and musicians who formed the Muiderkring or Muiden Circle. She was highly admired by the artistic elite such as P. C. Hooft, Jacob Cats, Joost van den Vondel, Constantijn Huygens and others. They called her a muse, the second Sappho, a fourth grace and more and often dedicated works to her. She is particularly regarded for her diamond-point glass engraving. Additionally, she had an apparent interest in emblem books, as she translated into Dutch thirteen epigrams from Georgette de Montenay's Emblèmes, ou devises chrestiennes of 1584. She also contributed poetry to the 1618 emblem book, Silenus Alcibiadis, Sive Proteus by Jacob Cats. She was a contemporary and friend of Anna Maria van Schurman.

Discuss this Anna Visscher biography with the community: