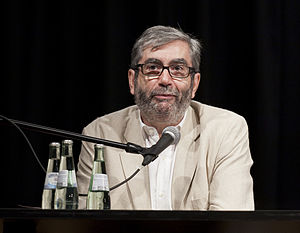 Who is Antonio Muñoz Molina?

Antonio Muñoz Molina is a Spanish writer and, since 8 June 1995, a full member of the Royal Spanish Academy. He currently resides in New York City, United States. In 2004-2005 he served as the director of the Instituto Cervantes of New York.

Muñoz Molina was born in the town of Úbeda in Jaén province. He studied art history at the University of Granada and journalism in Madrid. He began writing in the 1980s; his first published book, El Robinsón urbano, a collection of his journalistic work, was published in 1984. His columns have regularly appeared in El País and Die Welt.

His first novel, Beatus ille, appeared in 1986. It features the imaginary city of Mágina—a re-creation of his Andalusian birthplace—which would reappear in some his later works.

His other novels include Beltenebros, a story of love and political intrigue in post-Civil War Madrid, Los misterios de Madrid, and El dueño del secreto.

Discuss this Antonio Muñoz Molina biography with the community: