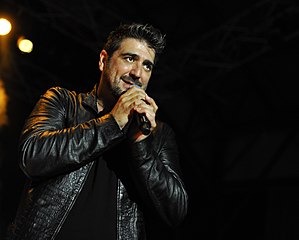 Who is Antonio Orozco?

Antonio Orozco is a Spanish singer-songwriter.

The son of a couple of Sevillian working-class marriage, he spent his childhood in Hospitalet de Llobregat. When he was 15 years old, he bought his first guitar and started to compose songs. He has won several prizes like the Premio Ondas and sold lots of records, his first album sold more than 100,000 copies, whereas his second album titled Semilla del Silencio sold over 300,000 copies.

In 2005, he released a self-titled album Antonio Orozco, which was a compilation of his best songs that eventually propelled him into stardom outside Spain, mainly in Latin America and other parts of the world. Some of his better known songs include: "Te Esperaré" and "Déjame".

He is known as well because of his duets with Lucie Silvas and Malú. Antonio Orozco was born November 23, 1972, and raised in Barcelona, Spain, by a working-class family. During a trip at the age of 15 to Triana, Sevilla, Orozco was exposed to the music that would change his life forever. His family, originally sevillanos, had roots in the region and its music: flamenco. His family soon relocated to Osuma, in Sevilla, a state known for its vibrant music community. Orozco took up flamenco guitar and began accompanying vocalists as a hobby. In time, his talent for songwriting bubbled to the surface, and he began performing professionally. Playing in bars and train stations, Orozco came to know pianist/producer Xavi Perez, who inspired him to record his own material. In the year 2000 he released his first solo disc, Un Reloj y una Vela, which Perez produced alongside Tato Latorre. Impressively, the record sold over 100,000 copies. Semilla de Silencio was released in 2001. It was also produced by Perez and Latorre, and sold three times as many copies as its predecessor. The 2004 release of his third work, El Principio del Comienzo, produced similar results. His breakout success won him opportunities to perform in the U.S. and all over Latin America. In 2005 Orozco was asked to tour with Juanes on his tour of the Americas, which made possible his live concert DVD, Antonio Orozco—Tour Edition. Orozco's 2006 release, Cadizfornia, made it onto Billboard's Top 100 European Albums chart.

Discuss this Antonio Orozco biography with the community: