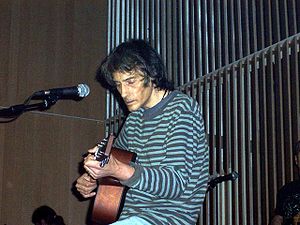 Who was Antonio Vega?

Antonio Vega Tallés was a Spanish pop singer-songwriter. He was born in Madrid and died in the same city, succumbing to pneumonia. He was 51 years old. In 1978 he formed the band Nacha Pop out of another band, Uhu-Helicopter. In 1980, Nacha Pop released their debut album. The band broke up in 1988 and Antonio began a solo career.

Discuss this Antonio Vega biography with the community: