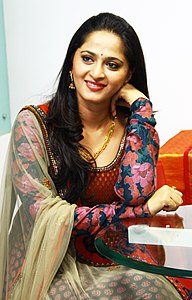 Who is Anushka Shetty?

Sweety Shetty, known by her stagename Anushka Shetty, is an Indian film actress, who works mainly in the Telugu and Tamil film industries.

Born in Mangalore, Anushka started her career as a Yoga instructor. It was while teaching Yoga, she got an offer to act in films. She thus made her acting debut through the 2005 Telugu film Super. She went on to star in a number of Telugu films such as Vikramarkudu, Arundhati and Vedam. After starring in a series of high-budget productions, she established herself as one of the leading actresses in in Telugu cinema. She received critical acclaim for her portrayal of the titular character in Arundhati, and as Saroja in Vedam, which fetched her two Filmfare, one Nandi and two CineMAA Awards. In the 2010s, Anushka also achieved success in Tamil cinema; the action film Singam, and its sequel Singam II were big commercial successes, while her performances in Vaanam and Deiva Thirumagal won her critical praise.

Discuss this Anushka Shetty biography with the community: