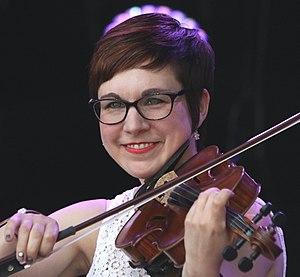 Who is April Verch?

April Verch is a Canadian fiddler and step dancer born and raised in the community of Rankin, Ontario, located approximately 15 km southwest from Pembroke, Ontario. She attended Berklee College of Music in Boston before embarking on her professional career. While she is best known for playing traditional Ottawa Valley style fiddle tunes, Verch's repertoire branches into many other fiddle styles. She has appeared as performer and teacher at Mark O'Connor's Fiddle Camps.

2010 Performer at the opening ceremony of the 2010 Winter Olympics in Vancouver.

Discuss this April Verch biography with the community: