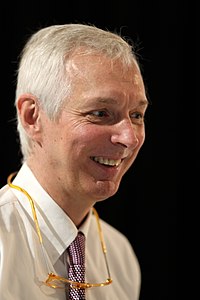 Who is Arjen Lenstra?

Arjen Klaas Lenstra is a Dutch mathematician. He studied mathematics at the University of Amsterdam. He is currently a professor at the EPFL, in the Laboratory for Cryptologic Algorithms, and previously worked for Citibank and Bell Labs.

Lenstra is active in cryptography and computational number theory, especially in areas such as integer factorization. With Mark Manasse, he was the first to seek volunteers over the internet for a large scale scientific distributed computing project. Such projects became more common after the Factorization of RSA-129 which was a high publicity distributed factoring success led by Lenstra along with Derek Atkins, Michael Graff and Paul Leyland. He was also a leader in the successful factorizations of several other RSA numbers.

Lenstra was also involved in the development of the number field sieve. With coauthors, he showed the great potential of the algorithm early on by using it to factor the ninth Fermat number, which was far out of reach by other factoring algorithms of the time. He has since been involved with several other number field sieve factorizations including the current record, RSA-768.

Lenstra's most widely cited scientific result is the first polynomial time algorithm to factor polynomials with rational coefficients in the seminal paper that introduced the LLL lattice reduction algorithm with Hendrik Willem Lenstra and László Lovász.

Discuss this Arjen Lenstra biography with the community: