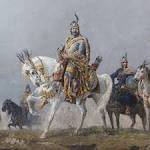 Árpád Feszty was a Hungarian painter. He was born in the town of Ógyalla. His ancestors were German settlers. He was the fifth child of Silvester Rehrenbeck, an affluent landowner at Ógyalla, and his wife Jozefa. Silvester was ennobled by the emperor on 21 April 1887, and the family thereafter took the name Martosi Feszty. Feszty mostly painted scenes from Hungarian history and religion.²

He studied in Munich from 1874, and later in Vienna. After returning home to Hungary, he was made famous by his two works entitled Golgota and Bányaszerencsétlenség. He painted his well-known monumental picture, the Arrival of the Hungarians, depicting the Magyar conquest of Hungary in 896, for the 1000th anniversary of the Conquest, with the help of many others, including Jenő Barcsay, Dániel Mihalik and László Mednyánszky. It was seriously damaged during World War II. It wasn't until 1995 that it was restored and exhibited at the Ópusztaszer National Heritage Park in Hungary.

Discuss this Árpád Feszty biography with the community: