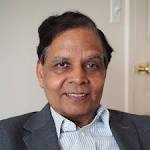 Who is Arvind Panagariya?

Arvind Panagariya is an Indian-American economist and Bhagwati Professor of Economics at Columbia University and an ex-Chief Economist at the Asian Development Bank. In the past, he has been the Chief Economist of the Asian Development Bank and a Professor of Economics and Co-director, Center for International Economics, University of Maryland at College Park. He has also worked for the World Bank, International Monetary Fund, World Trade Organization, and the United Nations Conference on Trade and Development in various capacities. He holds a Ph.D. degree in Economics from Princeton University.

Panagariya has written/edited ten books. His latest book, India: The Emerging Giant—was published in March 2008 by the Oxford University Press, New York and has been described as the ‘definitive book on the Indian economy’ by Fareed Zakaria and ‘a tour de horizon and a tour de force’ by Jagdish Bhagwati. His previous books include The Economics of Preferential Trade Agreements, 1996, AEI Press and Lectures on International Trade, 1998, MIT Press.

Panagariya is an editor of the India Policy Forum, a journal modeled on the Brookings Papers on Economic Activity and jointly published by the Brookings Institution, Washington, D.C. and the National Council on Applied Economic Research, New Delhi. His technical papers have appeared in the American Economic Review, Quarterly Journal of Economics, Review of Economic Studies, Journal of International Economics, and International Economic Review while his policy papers have appeared in the Foreign Affairs, Foreign Policy, World Economy, Journal of International Affairs and Finance and Development.

Discuss this Arvind Panagariya biography with the community: