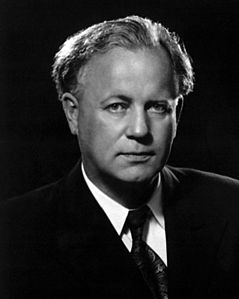 Ásgeir Ásgeirsson was the second President of Iceland, from 1952 to 1968.

Educated as a theologian, Ásgeir graduated with honours from the University of Iceland in Reykjavík in 1915, but was considered too young to be ordained as a minister. He married Dóra Þórhallsdóttir in 1917. Dóra was the daughter of Þórhallur Bjarnarson, bishop of Iceland 1908–1916. Her brother was Tryggvi Þórhallsson, who was Prime Minister of Iceland 1927–1932.

Ásgeir was elected to the Althing in 1923 at the age of 29 for the Progressive Party. He spoke as the president of the Althing at Þingvellir on the occasion of the Althing's 1000th anniversary celebrations in 1930, and became Minister of Finance in 1931 and Prime Minister in 1932. He left the Progressive Party in 1934, but stood for election as an independent for a while until he joined the Social Democratic Party, and remained in the Althing until he was elected president in 1952. From 1938 and until he was elected president, he was the director of Útvegsbanki Íslands, an Icelandic bank which later merged with three other banks and became Íslandsbanki.

Ásgeir was elected the second President of Iceland in a closely contested election in 1952, which had been called upon early due to the death of Sveinn Björnsson, Iceland's first president. Ásgeir's main opponent, Bjarni Jónsson, minister in the Reykjavík Cathedral, had the endorsement of the governing parties in Iceland, the Independence Party and the Progressive Party. Still Ásgeir managed to receive 46.7% of the vote, compared to Bjarni's 44.1%. The third candidate, Gísli Sveinsson, a former MP for the Independence Party, got 6.0%.

Discuss this Ásgeir Ásgeirsson biography with the community: