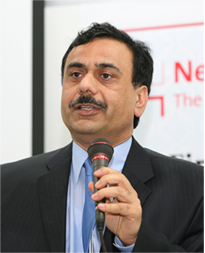 Who is Ashutosh Tewari?

Ashutosh K. Tewari is Chairman of Urology at the Icahn School of Medicine at Mount Sinai Hospital in New York City. He is a board certified American urologist, oncologist, and principal investigator. Before moving to the Icahn School of Medicine in 2013, he was the founding director of both the Center for Prostate Cancer at Weill Cornell Medical College and the LeFrak Center for Robotic Surgery at NewYork–Presbyterian Hospital. Dr. Tewari was the Ronald P. Lynch endowed Chair of Urologic Oncology and the hospital's Director of Robotic Prostatectomy, treating patients with prostate, urinary bladder and other urological cancers. He is one of world's leading urological surgeons, and has performed over 5500 robotically assisted procedures using the da Vinci Surgical System. Academically, he is recognized as a world renowned expert on urologic oncology with over 250 peer reviewed published papers to his credit; he is on such lists as America's Top Doctors, New York Magazine's Best Doctors, and Who's Who in the World. In 2012, he was given the American Urological Association Gold Cystoscope Award for "outstanding contributions to the field of urologic oncology, most notably the treatment of prostate cancer and the development of novel techniques to improve the outcomes of robotic prostatectomy."

Discuss this Ashutosh Tewari biography with the community: