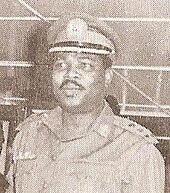 Who is Babafemi Ogundipe?

Babafemi Ogundipe was the de facto Vice President of Nigeria during Johnson Aguiyi-Ironsi's 1966 military government. He was born on September 6, 1924 to Yoruba parents from Ago-Iwoye, in present-day Ogun State in western Nigeria. He joined the Royal West African Frontier Force in 1941, serving in Burma between 1942 and 1945. He re-enlisted after the second World War, and rose to the rank of Brigadier in May 1964.

He served as the Chief of Staff, Supreme Headquarters Nigerian Defence Forces between January 1966 and August 1966. After the coup which overthrew Aguiyi-Ironsi, and following an agreement with the new military government led by Yakubu Gowon, he left the country for the United Kingdom, where he attended the 1966 Commonwealth Heads of Government Meeting as Nigeria's representative in September. Thereafter he took up appointment as Nigeria's High Commissioner in the United Kingdom, a post he held until August 1970, when he left public service. He died in London in November 1971.

He was criticized in some quarters for his refusal to take the mantle of office of his supreme commander, who had been murdered in the August 1966 coup, and that this aggravated the pogroms that eventually followed. He was the most senior military officer after the death of Ironsi, and the thinking was that he ought to have taken power himself. The fact is that this was not a viable thing for him to have done. He had no troops, and he was unable to rely on the few individuals available to him, many of whom were northern and were unwilling to take orders from a Christian southerner. Furthermore, he was basically a soldier and had no personal political ambitions. He understood that the preservation of Nigeria as one country meant that a southern Christian would be unable to hold the country together, and he took himself out of the power equation by accepting Yakubu Gowon as the head of the new military government.

Discuss this Babafemi Ogundipe biography with the community: