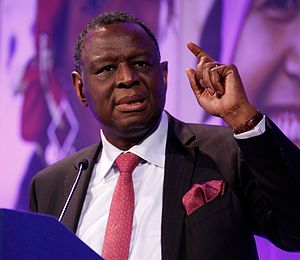 Who is Babatunde Osotimehin?

Babatunde Osotimehin, a national of Nigeria, was appointed on 19 November 2010 as the new Executive Director of UNFPA, the United Nations Population Fund, for a four-year term. He assumed the position on 1 January 2011 and became the organization's fourth Executive Director. He holds the rank of Under-Secretary-General of the United Nations. Previously, he was Nigeria's Minister of Health. He left this office in March 2010 when Acting President Goodluck Jonathan dissolved his cabinet.

Discuss this Babatunde Osotimehin biography with the community: