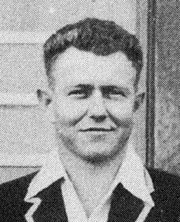 Who was Barry Fisher?

Barry Fisher was an Australian first class cricketer who represented Queensland from 1954–55 until 1967–68. A right arm fast bowler, he played 56 matches and briefly was seen as a future Australian Test prospect after being selected for an Australian Second XI tour of New Zealand in 1959–60. his first-class career ended after he was no-balled for throwing in November 1967.

Fisher was born into a cricketing family; his father Alexander played three matches for Queensland in the 1930s. Fisher modelled his action on the great Australian bowler Ray Lindwall who was widely regarded as the best fast bowler of the late 1940s and early 1950s. Lindwall had a classical side on action which imparted outswing at high pace. Fisher made his first-class debut for Queensland against New South Wales during the 1954–55 season when Lindwall was on international duty and left a vacancy in the team. Fisher made an impressive debut, taking match figures of 8/128. Fisher was unable to hold down a regular place in the Queensland side until 1957–58 season.

Fisher had a metal pin inserted into his left shoulder in 1952 to prevent it from being dislocated, but he still suffered persistent shoulder problems. He was a useful lower order batsman who batted in the number 9 position,and scored his only first-class hundred of 103 against Victoria in the 1957–58 season. Strong performances saw Fisher selected in an Australian XI that played against the English cricket team during their 1958–59 tour of Australia leading up to the Tests. Such teams were used to trial prospective Test players. Fisher also shared the new ball with Lindwall for Queensland when the latter was not playing for Australia. The following year in 1959–60, while the Australian Test team toured the Indian subcontinent, Fisher was selected for a Second XI tour of New Zealand under Ian Craig. In 1962–63, Fisher had a notable performance of 5/18 in one match against New South Wales, helping to bowl them out for 82. He retired at the end of the season, but made a comeback in the 1967–68 season.

Discuss this Barry Fisher biography with the community: