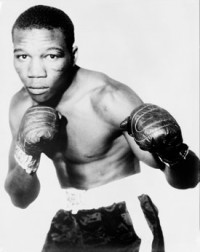 Who was Benny Paret?

Benny "the Kid" Paret, was born as Bernardo Paret in Santa Clara, Cuba. He was a Cuban welterweight boxer who won the world welterweight title twice in the early 1960s. Paret died in 1962 following an unsuccessful attempt to defend the crown in what is considered to be the first ring death witnessed by a national television audience. He had a lifetime record of 35 wins, 12 losses and 3 draws.

Discuss this Benny Paret biography with the community: