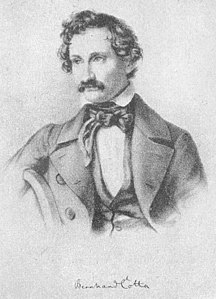 Who was Bernhard von Cotta?

He was born in a forester's lodge at Kleine Zillbach, Meiningen, near Eisenach, the son of Heinrich von Cotta, founder of the Tharandt Forestry Academy near Dresden. He was educated at the Bergakademie Freiberg and the University of Heidelberg, as well as at his father's forestry academy. Botany at first attracted him and he was one of the earliest to use the microscope in determining the structure of fossil plants. Later on he gave his attention to geology, to the study of ore-deposits, of rocks and metamorphism. He studied deposits of minerals in the Austrian Alps, Hungary, and Romania. He also examined soils and studied their effects on the geography and history of Germany.

From 1842 to 1874 he held the professorship of geology in the Bergakademie and was regarded as an excellent teacher. He published many important works on geology, including Rocks Classified and Described: a Treatise on Lithology, one of the first comprehensive works on the subject issued in the English language, which gave great impetus to the study of rocks in Britain.

Discuss this Bernhard von Cotta biography with the community: