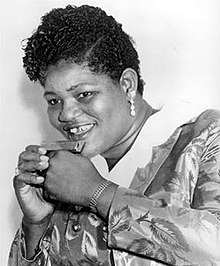 Who was Big Mama Thornton?

Willie Mae "Big Mama" Thornton was an American rhythm and blues singer and songwriter. She was the first to record Leiber and Stoller's "Hound Dog" in 1952, which became her biggest hit. It spent seven weeks at number one on the Billboard R&B charts in 1953 and sold almost two million copies. However, her success was overshadowed three years later, when Elvis Presley recorded his more popular rendition of "Hound Dog". Similarly, Thornton's "Ball 'n' Chain", had a bigger impact when performed and recorded by Janis Joplin in the late 1960s.

Discuss this Big Mama Thornton biography with the community: