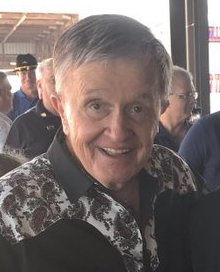 Who is Bill Anderson?

James William "Bill" Anderson III is an American country music singer, songwriter and television personality. He has released more than 40 studio albums and has reached No. 1 on the country charts seven times: "Mama Sang a Song", "Still", "I Get the Fever", "For Loving You", "My Life", "World of Make Believe", and "Sometimes". Twenty-nine more of his singles have reached the top ten.

Anderson has made several television appearances, including two stints as a game show host: The Better Sex in 1977, and the country music-themed quiz show Fandango on The Nashville Network. He has also hosted an interview show called Opry Backstage and was a producer of a talent show called You Can Be a Star, hosted by fellow Opry member Jim Ed Brown, both shows on the former Nashville Network, and has made guest appearances on several other television series.

Discuss this Bill Anderson biography with the community: