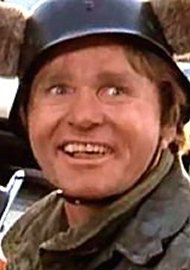 Who was Bill McKinney?

William Denison "Bill" McKinney was an American character actor whose most famous role was the sadistic mountain man in John Boorman's 1972 film Deliverance. McKinney was also recognizable for his performances in seven Clint Eastwood films, most notably as Capt. "Redlegs" Terrell, commander pursuing the last rebels to "hold out" against surrendering to the Union forces in The Outlaw Josey Wales.

Discuss this Bill McKinney biography with the community: