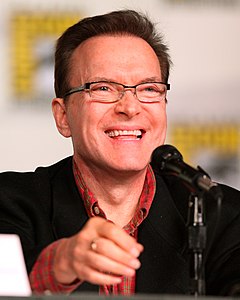 Who is Billy West?

William Richard "Billy" West is an American voice actor, singer and comedian best known for his voice-over work in a number of television series, films and commercials. He has done hundreds of voice-overs in his career such as Ren Höek and Stimpson J. Cat on The Ren & Stimpy Show, Doug Funnie, Porkchop, and Roger Klotz on Doug, Philip J. Fry, Professor Farnsworth, Dr. Zoidberg, Zapp Brannigan, and a number of others on Futurama. He also does voices for commercials and is the current voice of the red M&M and Buzz, the Honey Nut Cheerios Bee. In addition to his original voices, he has also voiced Bugs Bunny, Elmer Fudd, Shaggy Rogers, Popeye, and Woody Woodpecker during later renditions of the respective characters. He was also a cast member on The Howard Stern Show, noted for his impersonation of Larry Fine.

Discuss this Billy West biography with the community: