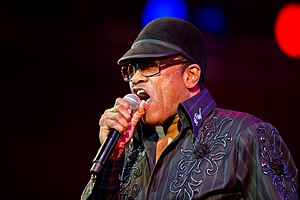 Who was Bobby Womack?

Robert Dwayne "Bobby" Womack was an American singer-songwriter and musician. An active recording artist since the early 1960s, when he started his career as the lead singer of his family musical group the Valentinos and as Sam Cooke's backing guitarist, Womack's career spanned more than 50 years, during which he played in the styles of R&B, soul, rock and roll, doo-wop, gospel, and country.

Womack wrote and originally recorded the Rolling Stones' first UK No. 1 hit, "It's All Over Now" and New Birth's "I Can Understand It" among other songs. As a singer he is most notable for the hits "Lookin' For a Love", "That's The Way I Feel About Cha", "Woman's Gotta Have It", "Harry Hippie", "Across 110th Street" and his 1980s hit "If You Think You're Lonely Now".

Discuss this Bobby Womack biography with the community: