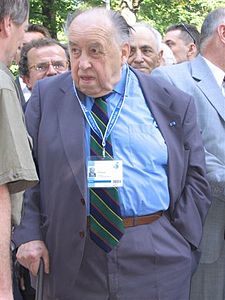 Bohdan Osadchuk was a Ukrainian historian and journalist.

Dr. Bohdan Osadchuk was born in Kolomyia. He was a professor at the Free University of Berlin, one of the most senior members of the Ukrainian Free University of Munich, and a long-standing freelance writer for Kultura, a Polish emigre magazine published in Paris. In 2009 he was awarded a Bene Merito Honour medal by Foreign Minister Radosław Sikorski in recognition of scientific achievements and efforts to Polish-Ukrainian reconciliation.

He died in Czechówka near Myślenice situated in the Lesser Poland Voivodeship.

Discuss this Bohdan Osadchuk biography with the community: