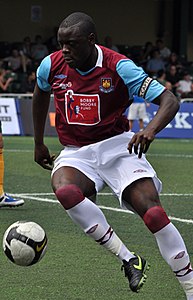 Bondz Bondzanga N'Gala is an English professional footballer who currently plays for League Two side Portsmouth, as a central defender.

N'Gala began his career at West Ham United, progressing through the youth ranks before signing a professional deal with the club in 2008. In January 2008, he joined Conference National side Weymouth on loan until the end of the 2007–08 season, although the loan deal was ultimately cut short. The following season, N'Gala was loaned to Milton Keynes Dons for a month. He returned to his parent club, and made his first-team debut for West Ham in September 2009. Two months later, in November 2009, N'Gala was briefly loaned to Scunthorpe United, playing just two games for the club. In March 2010, N'Gala joined Plymouth Argyle on loan for the remainder of the 2009–10 campaign. On returning to West Ham, he was released, and opted to sign for Plymouth on a permanent basis ahead of the 2010–11 season. He spent one season with the club, before signing for Yeovil Town on a free transfer in July 2011. A year later, N'Gala signed for Stevenage for an undisclosed fee, spending a month on loan at Barnet during the season. He was released by Stevenage in May 2013.