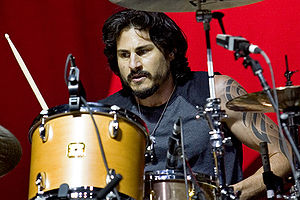 Who is Brad Wilk?

Bradley J. "Brad" Wilk is an American musician, actor, and activist, best known as the drummer of the American rock band Rage Against the Machine.

Wilk started his career as a drummer for Greta in 1990, and helped co-found Rage with Tom Morello and Zack de la Rocha in August 1991. Following that band's breakup in October 2000, Wilk joined Morello and Rage bassist Tim Commerford in forming the now-defunct Audioslave.

Wilk has also performed drums on English metal band Black Sabbath's original lineup reunion album 13, filling in for their original drummer Bill Ward, who declined to participate. The album was released in June 2013.

Discuss this Brad Wilk biography with the community: