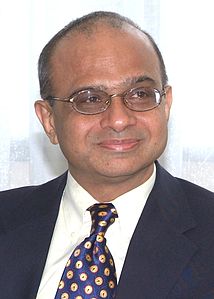 Who is Brahma Chellaney?

Brahma Chellaney is a leading strategic thinker and an analyst of international geostrategic trends. A well-respected, independent-minded scholar, his latest work focuses on the geopolitics of natural resources, especially water. He is the winner of the 2012 Bernard Schwartz Book Award by the New York-based Asia Society for his pioneering work, Water: Asia's New Battleground, published by Georgetown University Press. He received the $20,000 prize at a special event in New York on January 23, 2013. He has since published a new book on the global geopolitics of natural resources Water, Peace, and War: Confronting the Global Water Crisis, brought out by Rowman & Littlefield, one of the leading U.S.-based publishers.

Professor Chellaney, the first Bernard Schwartz awardee living outside the Anglosphere, is a Professor of Strategic Studies at the New Delhi-based Centre for Policy Research, an independent think-tank; a member of the Board of Governors of the National Book Trust of India; and a nonresident affiliate with the International Centre for the Study of Radicalization at King's College London. He has been a Fellow at the Norwegian Nobel Institute, which through the Nobel Committee awards the Nobel Peace Prize annually. He was formerly a member of the Policy Advisory Group headed by the External Affairs Minister of India.

Discuss this Brahma Chellaney biography with the community: