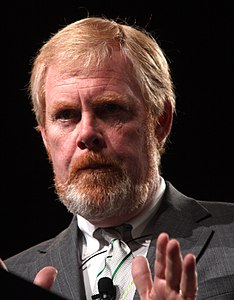 Who is L. Brent Bozell III?

Leo Brent Bozell III is an American conservative writer and activist. Bozell is the founder and president of the Media Research Center, the Conservative Communications Center, and the Cybercast News Service. Bozell served as president of the Parents Television Council from 1995 to 2006, after which he was succeeded by Timothy F. Winter. In addition, currently, Bozell serves on the board for the Catholic League for Religious and Civil Rights and has served on the board of directors in the American Conservative Union. Bozell is also nationally syndicated by Creator's Syndicate where his work appears in publications such as the Wall Street Journal, Washington Post, Washington Times, New York Post, Los Angeles Times, and National Review.

Discuss this L. Brent Bozell III biography with the community: