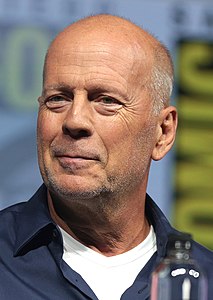 Who is Bruce Willis?

Walter Bruce Willis (born March 19, 1955), better known as Bruce Willis, is an American actor, producer, and musician. His career began in television in the 1980s and has continued both in television and film since, including comedic, dramatic, and action roles. He is well known for the role of John McClane in the Die Hard series, which were mostly critical and uniformly financial successes.

Discuss this Bruce Willis biography with the community: