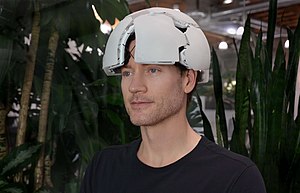 Who is Bryan Johnson?

Bryan Lee Johnson is a writer, actor, podcaster, screenwriter and comic book writer associated with Kevin Smith and the View Askewniverse. He is best known by his local fame in New Jersey and appearances in filmmaker Smith's New Jersey films as comic book fan Steve-Dave Pulasti. He was also the basis for the Clerks character Randal Graves. Through his friendship with Smith, he was often involved in his productions until Smith moved to Los Angeles. He worked briefly at the Los Angeles branch of Smith's comic book store, Jay and Silent Bob's Secret Stash. He became co-host of the Tell 'Em Steve-Dave! podcast with friend Walt Flanagan and Brian Quinn. He also stars in the AMC reality series Comic Book Men.

Johnson has collaborated with Flanagan in creating comics adapted from their screenplays, including the 2004 miniseries Karney and the 2007 miniseries War of the Undead. According to an April 12, 2013 posting, Johnson no longer lives in his parents' basement.

Discuss this Bryan Johnson biography with the community: