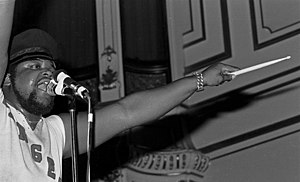 Who was Buddy Miles?

George Allen Miles, Jr., known as Buddy Miles, was an American rock and funk drummer, most known as a founding member of The Electric Flag in 1967, then as a member of Jimi Hendrix's Band of Gypsys from 1969 through to January 1970.

Discuss this Buddy Miles biography with the community: