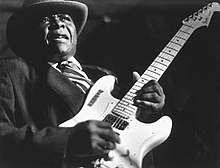 Who was Buster Benton?

Buster Benton was an American blues guitarist and singer, who played guitar in Willie Dixon's Blues All-Stars, and is best known for his solo rendition of the Dixon-penned song "Spider in My Stew." He was tenacious and in the latter part of his lengthy career, despite the amputation of parts of both his legs, Benton never stopped playing his own version of Chicago blues.

Discuss this Buster Benton biography with the community: