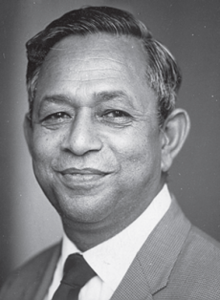 Chirag Ali Shah was a Fiji Indian farmer and politician, who served in the Legislative Council both as a nominated and an elected member.

Since 1937, the Government of Fiji had followed a policy of nominating a Muslim to one of the two seats reserved for nominated Indian members in the Legislative Council. In 1963, although a Muslim, Sidiq Koya, was elected, the Government continued with its policy and nominated Ra farmer, Shah, also a Muslim, to the Legislative Council. In the past, those nominated by the Governor had tended to be pro-Government but Shah aligned himself with the group opposed to Government policies. This group, known as the Citizens Federation, and including farmers union representatives A. D. Patel, S. M. Koya and James Madhavan, later formed the first political party in Fiji, the Federation Party.

Shah's inclusion in the new political party provided diversity to the hierarchy of the party which was dominated by lawyers, businessmen and academics. He took part in the 1965 Constitutional Conference in London with his other colleagues in the Federation Party. In the 1966 elections he won the Tavua/Ra seat for the Federation Party in a three-way contest with 58% of the vote. He had a tougher fight in the 1968 by-election when his opponent was a former member of the Federation Party in the Legislative Council and lawyer, M.T. Khan, but again he won with grass-roots support.

Discuss this C. A. Shah biography with the community: